Skip to content
Next week, my husband and I leave for a short vacation to Illinois.
What started out as a weekend trip to attend his best friend’s wedding turned into a whole lot more when I learned that the Kitchen and Bath Industry Show – KBIS – would begin in Chicago the following Tuesday.  I begged Jeb to stay in Illinois “just a few more days” and attend with me.  After finding out that admission to the show floor is FREE, I knew there was no way I was going to miss what could be a once-in-a-{kitchen design}-lifetime event.
The only industry show I’ve ever attended was NeoCon in Baltimore during my first term of college.  We took a field trip as students, but the focus of the show {mainly office design} barely pertained to what most of us would go on to pursue with our careers.  I still had a blast.
Since registering for KBIS, I’ve been receiving more e-mails than I have time to read about specific exhibits, making trip reservations, connecting with others, and advertisements.
One exhibit e-mail captured my attention:

“The UNcontained exhibit, anchoring the center of the KBIS show floor,
is a journey through the lifestyle stories of five unique consumers.
You will recognize them. You will relate to them.
The containers are not a room in their homes but rather
a creative perspective on the attributes and values
that have changed the rules of design.
All the rules are broken. Meet your next clients.”
{Source: KBIS.com/show/uncontained}
I have no idea how they’ll display these containers, but so far this exhibit is #1 on my list of “Things to See” while at KBIS 2012!  {I’d love to say I’ll take plenty of pictures, but cameras are banned at the show.}
Did you know that storage containers are a huge design trend?  They’re fairly inexpensive, weather-resistant, and the design options are endless. If you’ve never heard about this, I think you’re missing out.
It’s taken the idea of recycling and “green” design to a whole new level.  I could go on and on about container design, but I think it’s fascinating!  I hope you’ll agree.. and I think you’ll be as intrigued as I was once you see some of the things that have been made with them!
My introduction to container design was with this picture in a magazine article several years ago: 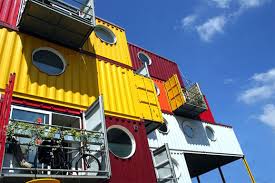 I can’t remember what magazine it was in.
It’s called “Container City I” and was built in London in 2001.
Can you imagine making an old boxcar or shipping container your next residence?
Truthfully, people have been living in containers for years.  Mostly, it’s been due to poverty. {Aren’t hobos notorious for sleeping in railroad cars?} What was once born out of necessity has now become trendy!
According to http://www.shippingcontainers24.com, most shipping container homes are made from either 20′ or 40′ containers.  Usually, they’re stacked or placed together in a row to make a house.  With internal dimensions just under 8′ wide and 8′ high, they’re only a few inches shorter than an average room height.  Bathrooms are typically under 8′ wide, and a galley kitchen would easily fit those dimensions, so it wouldn’t be much of a stretch to create those spaces.  Living areas and bedrooms may be a bit more challenging, but this is where designers get creative!
Check out some of the pictures I’ve found:
My taste is not usually very modern, but I’ve also seen them painted so that they almost resemble a log home!
Architecturally, I think the options are limitless!
Like a kid in a Lego store, I can only begin to dream of the possibilities.
If you hire someone to build a container home, you would likely spend $150,000 – $175,000 on the finished product.
For more information about container homes, check out these websites:
http://www.containerhomes-info.com/
http://www.containerhomeguide.com/
http://www.cubicinspirations.com/
http://containerhouse.info/
Happy Designing! -Cherie

I am a Mom and self-employed Interior Designer. I own a small design studio & home decor shop in downtown Emporium, PA. It’s a small town in the PA Wilds of north-central Pennsylvania. We have some of the most beautiful scenery, and Fall (my favorite season) is breathtaking. I blog for fun to keep my friends and clients informed of what's going on in the design and decorating world, to share my designs, and to show what we're working on in our own home. View more posts